Our recent research of a novel brain neuropeptide

Throughout history, our ancestors needed to accumulate fat to survive during times when food sources were scarce. However, for most people in the modern age, food is abundant and eating too much is a major cause of weight gain, obesity and diseases affecting the metabolism. Obesity in particular, can lead to diseases such as diabetes and heart disease.

Hunger and appetite are regulated by proteins and other chemicals that act as messengers, for example insulin, and a region of the brain called the hypothalamus. However, the full mechanisms that regulate these sensations remain unclear. Recently, we have discovered a small protein called neurosecretory protein GL (NPGL; 80 amino acid residues) in a part of the hypothalamus of birds and mammals (BBRC 2014, Endocrinology 2017, eLife 2017). However, it was not known if NPGL plays a role in regulating eating habits and weight gain.

We have found that NPGL is produced in the hypothalamus of rats and is regulated by diet and insulin. When the gene for NPGL was manipulated to produce too much of the small protein, rats fed a high calorie diet started to eat more, and gained more weight and body fat. Adding additional NPGL to their brains had the same effect. When the animals were fed a normal diet, NPGL only moderately affected how much they ate, but it substantially increased how much fat they produced. We also observed that when animals were starved and insulin levels were low, the rats started to produce more NPGL. These results suggest that NPGL plays a role in fat storage when energy sources are limited, and can contribute to obesity when too much NPGL is produced in animals on a high calorie diet. We reported these results on the Journal, eLife (2017).

These findings indicate that NPGL could be an additional brain chemical that regulates hunger and fat storage in mammals. A next step will be to reveal the specific mechanisms by which NPGL regulates overeating and fat accumulation. We hope that these findings will further advance the study and treatment of obesity and obesity-related diseases. 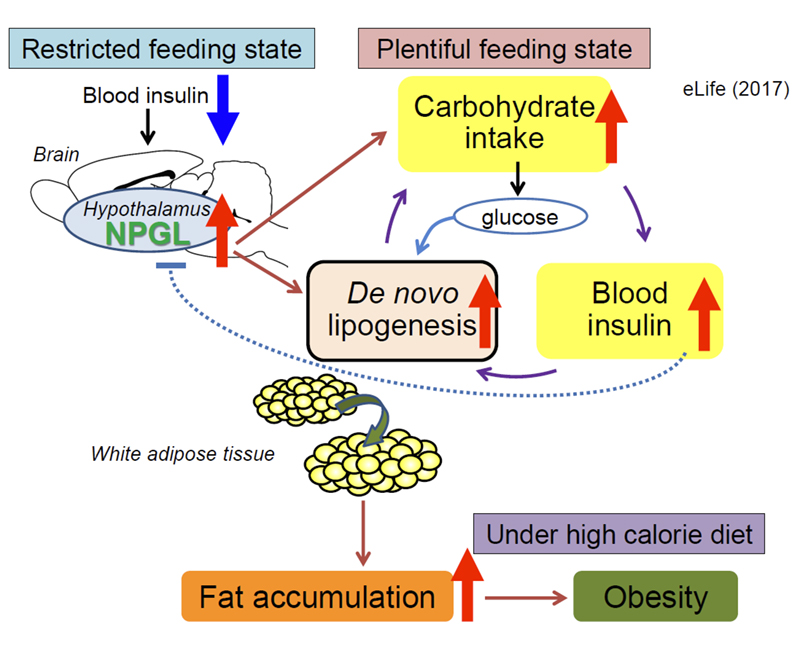